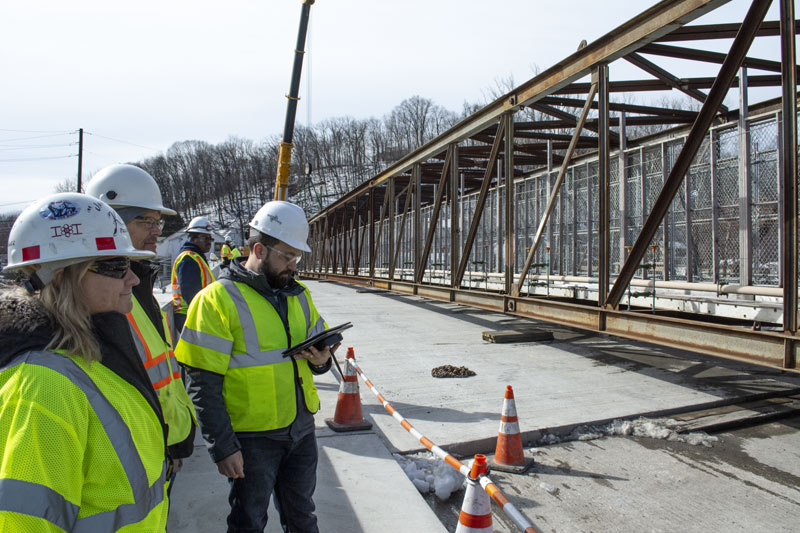 J.D. Eckman, Inc., a full service construction company specializing in bridges and highways, was contracted to replace a 100-year-old concrete arch bridge spanning the Schuylkill River in Leesport, Pennsylvania. The bridge carried State Route 1003 and a pedestrian sidewalk, making it an important link between the two parts of town divided by the river. A temporary pedestrian bridge was erected at the beginning of the project, allowing residents to cross the river during the two-year construction phase. In addition to providing pedestrian access, the temporary bridge enabled a neighboring EMS company to stage rescue equipment on the far side of the structure and allowed first responders to cross the bridge quickly in an emergency.

As the new bridge approached completion, it was time to remove the temporary bridge to allow for final paving. The plan was to position cranes on both sides of the river, rig the cranes to both ends of the bridge, and perform a tandem lift to remove the bridge and place it on the road deck of the new bridge for disassembly.

A tandem lift presents several opportunities for potential complications. One issue is that a tandem lift depends on both crane operators working in unison to lift both ends of the structure evenly. If one operator begins to swing the load before the other is fully clear of obstructions, the load could collide with an object causing unknown dynamic forces in the rigging and crane. Another potential issue can occur if the bridge has not been properly disconnected before lifting. The Leesport bridge was bolted to concrete foundations on either end of the riverbank. If a bolt had been unintentionally left in place or if the bridge had rusted at the connection point, the rigging could be overloaded during the lift because the load would not be free to move.

To have a greater insight into the status of the lift, J.D. Eckman incorporated Slingmax® Smart Slings® Technology into the lift plan. Smart Slings use electronic Sling Overload Sensors inside the sling, which constantly monitor for severe overload. During a successful lift, the sensors transmit a “normal” signal to a computer base station every 30 seconds. This allows a designated person to constantly watch the safety of the lift while their coworkers concentrate on other tasks.

In the case of a severe overload, the Smart Slings will instantly transmit an “overload” signal to the base station. This will display an alert on the base station screen as well as send text messages and emails to everyone registered in the system. The crane operator, riggers, and anyone else on the job site could then stop the operation, lower the load, and reevaluate the lift.

The Leesport bridge lift crew was trained on the proper use and rigging of Smart Slings. Since the crew was already familiar with Twin-Path® synthetic round slings, it was a simple transition to Smart Slings—they only had to remember not to rig on the orange “no-rig zone.” Meanwhile, the Smart Sling base station set up at one end of the bridge automatically detected the Smart Slings and showed they were in a “normal” condition. When the lift started, J.D. Eckman and Slingmax® personnel were able to monitor the slings, which indicated that they remained in good condition throughout the lift. With a range of 500 feet and a battery-operated computer, supervisors were free to monitor the lift while walking around and observing the crews and all phases of the procedure. If staff observed an issue, the crane operator could be immediately alerted. In this case, the lift went perfectly, with the slings indicating “normal” throughout. 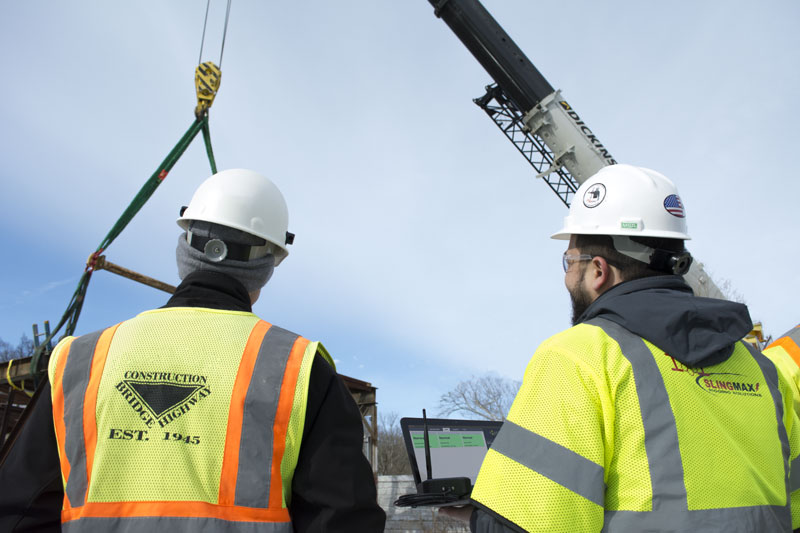 At the end of the operation, nothing had to be done except turn the base station off and stow away the slings for the next time. Since the sling batteries have a two-year lifespan, the riggers did not have to worry about turning off the sensors or charging them. In addition, the sensors are waterproof and shockproof, so normal synthetic sling care ensures that the sensors will be in good working order for another day.